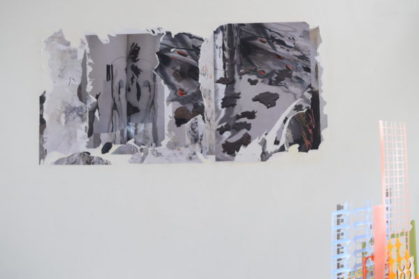 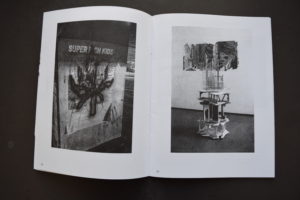 This exhibition is a collaboration between K–G–B and Nieuw Dakota.

How do urban planning and aesthetic norms impact human behavior, interaction, perception and imagination? And how do these social and mental structures in turn affect the artificial environments of the city?

These questions run like a backbone through the evolving exhibition project Benedenland, that has now reached its third and final stage. In the three separate but gradually interwoven parts, Karl Georg Staffan Björk has investigated the radical transformation of Het Breed – a modernist housing complex in Buikslotermeer in Amsterdam Noord. Looking at the time before, during and after the area’s modernization process, the artist has set out to trace and interpret visual manifestations revealing relationships between aesthetics, behavior and ideology. Stretching over more than four years, the project has explored notions like decay, artificiality, isolation and belonging by merging stylistic references to the modernist architecture (light, space and repetition), with how it is filtered through the bodies, minds and habit patterns of its residents.

The focus of the final part is to engage with Het Breed’s original architectural plan, both specifically and as a model for modernist ideals, utopias and housing complexes in general. Using the hive as a metaphor, Benedenland looks closer at the social aspects of urban planning and its potential to transform when realized and reconsidered. Set in relation to the Dutch phenomenon “poldering” (areas of low-lying land that have been reclaimed from a body of water and are protected by dikes), the activities of the hive are seen as ongoing “post-architectural” developments (a form of informal power structure) that allow new layers to unfold.

Visualizing and imagining Het Breed’s past and future currents, the exhibition consists of a sculptural mixed media installation with works by the following artists:

By collectively addressing subjects that deal with shared communal sites, the aim is to make people more aware of and involved with their living environments. How do objects and surroundings transform over time, and how can these changes be controlled and altered by human input? Since the building as a scene is not static, what happens when it is used as a tool for imagination; a reconsideration of reality as something moldable, open to interaction and play?

An Introduction to the Realm of Real Fantasy by

Benedenland is supported by AFK